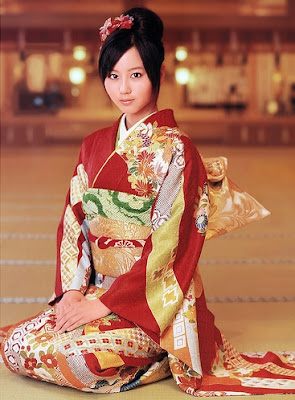 Amongst the traditional Japanese clothes that have long been part of the local tradition, the kimono is the most famous one and perhaps the biggest identity forming apparel of the country. Traditionally kimonos have been worn by both men and women. The word kimono literally means "clothing",  it is also called as Gofuku which means clothes of Wu and up until the mid 19th century it was the form of dress worn by everyone in Japan.
The Han Chinese clothing in fact influenced the earlier Kimonos of 5th Century. It was only during the Heian period, the kimonos changed and became more stylized about their designs.
Then during the period of Muromachi, a single Kimono,Kosode, was worn. It was actually considered an underwear before that time, and it was worn without the trousers or divided skirt called Hakama and held closed by a belt called Obi.
After this, during the period of Edo, the sleeves became lengthy, especially among women who are unmarried. At the same time the Obi also became wider and the style of  tying the Obi changed in distinctive ways. After this the essentially basic shape of Kimono for men and women changed drastically.

They are worn now mostly on special occasions, people owning perhaps only one or even just hiring them two or three times a year instead. Kimono is perhaps most unique wafuku. In the old times, both men and women used kimonos as everyday costume, but nowadays only women wear it in formal occasions. Men are seen wearing kimonos very rarely in Japan, only in their wedding or other traditional ceremony. Women can wear kimono in various occasions, starting from seijinshiki (japanese celebration that honors every person that has turned 20 years old)  , to omiai, or traditional tea ceremony.

There are different types of kimonos, worn by different classes of people and on different occasions. Kimonos are available in different kinds of materials as well. Kimonos range from highly formal to casual. The extent of formality of a kimono is determined by its fabric, pattern, and colour, as well as the number of crests in it. Having about five crests (known as 'Kamon"in Japanese) on one's kimonos signifies the highest level of formality. A kimono made of silk similarly signifies a high degree of formality, while those of cotton and polyester signify casualness.

Tailoring a kimono is called wasai (和裁 means Japanese traditional dress making ) and it takes one to two months just to hand tailor a kimono, add to that the time it takes for the textile art to be applied by various artisans to the fabric and the fact that most are silk and you realise why a silk kimono can cost as much as a small car and why the Japanese take such care of them and expect each to be used by at least three generations.

1.1 The Basic Elements of Kimono:
In the old times, kimono had more layers of cloth than nowadays. Court ladies were said to have up to sixteen layers of different coloured fabrics. Kimono is made of only four strips of fabric - two for main panels and two for sleeves. Thus the basic construction of kimono is rather simple. However, making a kimono consumes more cloth than you would realize - about of wide cloth.
A kimono is composed of different parts with each of them having their own names. 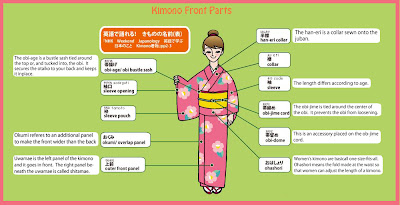 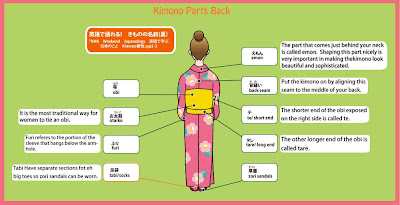 1.2 Kimono Textile:
Kimonos can be made of silk, wool, cotton, linen or synthetic material and with most unique designs. One of the most famous kimono materials is tsumugi, especially one from Oshima. Different motifs decorate the textile. Some are sewn into the cloth, some are dyed. They are imprinted with the most unique designs . 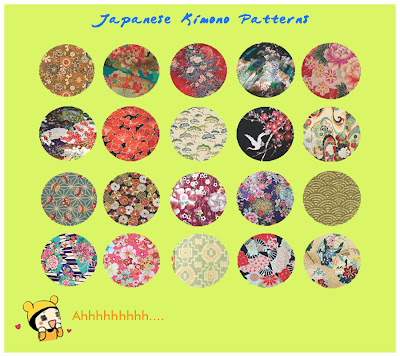 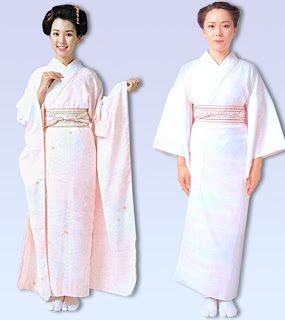 With formal kimono, it is common to wear two (or sometimes more) layers of traditional underwear. The first layers of underwear (against your skin) is called hadajuban. It protects kimono and second layers of cloth from sweat and provide warmth in winter. Sometimes padding is worn underneath the hadajuban.
Over hadajuban, nagajuban is worn. The purpose of nagajuban is to conceal the body shape and make kimono look smooth when worn, and add little bit softness to the look of kimono.

An important part is missing from images above which is obi, the belt or sash. It is usually tied just below the woman'sbosom. There are various obi that convey a different message, as discussed further.
The purpose of obi is not only keep the package together, but also to shape the woman's body so that the hip and breasts are not visible. If obi itself isn't enough to do this, sometimes a towel is added under obi. A cardboard or similar material is often added to smooth down the wrinkles of the obi to make it look more smooth and give it support.
The height of the obi varies regarding woman's age marital status. Obi is sometimes suggested to be a Japanese version of western corset, but this is incorrect since obi is not that tight and also, as we realized, purpose of obi is opposite from corset - to conceal feminine parts. 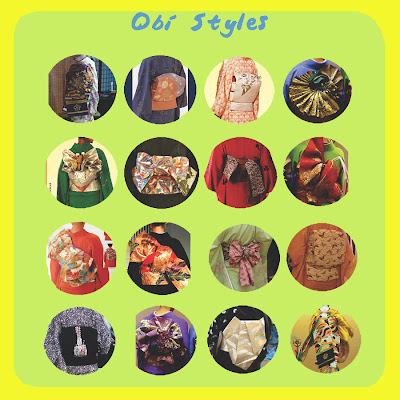 1.5 Additional Accessories:
There are many more pieces to the kimono that may or may not be required, depending on the formality of the occasion. Wooden sandals and special socks called tabi are often worn. Kanzashi are decorations worn in the hair of female kimono wearers and often feature silk flowers and small fans.The intricacies of kimono dress are numerous and have many variations depending on the occasion or season.

1.6 Kimono Styles:
There are styles of Japanese kimono for various occasions, ranging from extremely formal to very casual. The level of formality of women’s kimonos is determined mostly by the pattern and fabric, and also the color. The choice of which type of kimono to wear is laden with symbolism and subtle social messages.
The specific choice relates to the woman’s age and marital status, and the level of formality of the occasion. In descending order of formality. 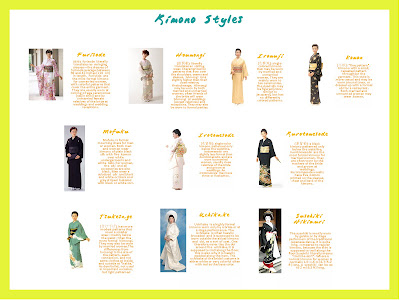